'The Secrets to a Healthier, Happier You in 2020' Podcast Episode 2: How to Be More Mindful of Your Mental Health In the New Year

Episode 2: Master Your Own Mental Health

The new year is the perfect time to get real with yourself about your health — and that includes being mindful about your mental health. The first two episodes are available now on Apple Podcasts, Spotify, Google Podcasts and Stitcher.

On episode 2 of “The Secrets to a Healthier, Happier You in 2020” podcast, Us Weekly‘s Christina Garibaldi is joined by RxSaver’s medical expert Dr. Holly Phillips to break down the stigma around mental health issues. The episode, which is available for download on Friday, January 3, emphasizes that mental health should be treated with the same care as physical health. 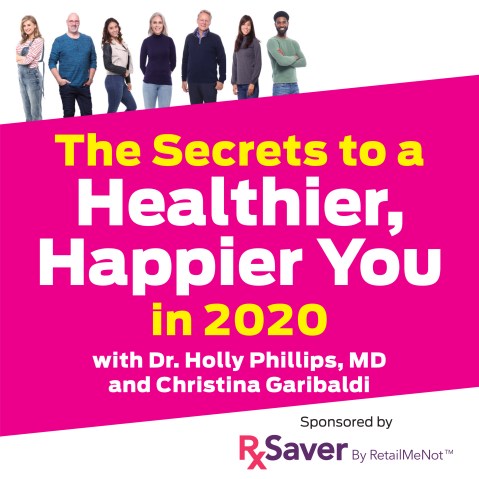 “Part of the reason mental illness is so debilitating for so many people is because we aren’t having these conversations. It seems that we don’t treat people with mental illness with the same compassion as we treat people who have certain physical illnesses,” Dr. Phillips explains in the upcoming episode. “I’ll even have patients who are reticent to talk about their emotional health or their mental health because they feel that it’s somehow their responsibility.”

This frank and open conversation about anxiety, depression and mental health awareness follows up the previous episode’s discussion about how to stay on track with your New Year’s resolutions after the holiday season ends.

Dr. Phillips revealed in episode 1, “After just one week, the stat is that 77 percent of resolution markers are still on track. So you’ve already lost about a quarter of people by the very first week in January. And after six months, 60 percent have dropped out.”

The RxSaver medical expert adds more staggering statistics to the mix in episode 2, noting that “about 56 percent of Americans who had mental illness last year did not get any treatment.”

For more tips on mindfulness and other healthy changes to make as you kick off the new year, listen “The Secrets to a Healthier, Happier You in 2020.”

Catch up with episode 1 as well, which focuses on secrets to a happier, healthier you in the new year.