The most talked about, blogged about, rumored about, gossiped about babies on the planet for once don’t belong to Angelina Jolie and Brad Pitt. They are Republican vice presidential candidate Sarah Heath Palin‘s 5-month-old son Trig Paxson Van Palin and the child soon to be born to her 17-year-old daughter, Bristol.

The 44-year-old Alaska governor set the political world spinning faster than Hurricane Gustav on Sept. 1 when she announced that her teen daughter is pregnant and planning to marry her boyfriend, Levi Johnston, amid increasing Internet speculation that the teen was actually the mother of Trig, Palin’s fifth child.

"Our beautiful daughter Bristol came to us with news that as parents we knew would make her grow up faster than we had ever planned," Sarah and her husband, Todd Palin, said in a statement. "Bristol and the young man she will marry are going to realize very quickly the difficulties of raising a child, which is why they will have the love and support of our entire family."

The revelation came just 48 hours after Daily Kos, a political Web site, posted a speculative theory that John McCain‘s running mate had faked her pregnancy with Trig to cover up the fact that it was actually Bristol, a high school senior, who was pregnant. Daily Kos’ speculation spread through the blogosphere with numerous Web sites breathlessly repeating the tale despite its complete lack of attribution or original reporting.

The "mud-slinging and lies" and the "despicable rumors," according to McCain aides, were the reason the Palins decided to go public with the news of Bristol’s pregnancy. (She is five months along.)

"Bristol Palin is a nice girl, a sweetheart," Susan Krueger, a family friend of the Palins, tells OK!. "Teenage pregnancy is a fact of life, and young people have been having babies for millennia. This is not anything new. I say more power to her for keeping the baby. Life is always the right choice. The Palins are a strong, faith-based family, and they can hold their own anywhere — even in Washington!" 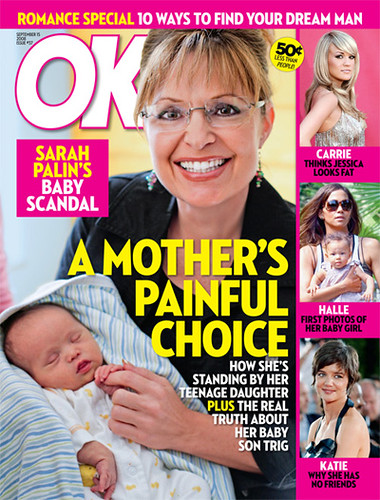 For the entire story on Sarah Palin’s baby scandal, including where she stands on the issues, pick up the new OK! — on newsstands everywhere on Thursday! 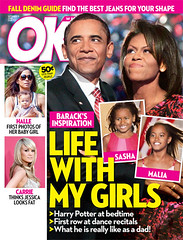 Want to stay on top of levi johnston news? Sign up for OK INSIDER!

Exclusive
Trouble In Paradise For Blake Shelton And Gwen Stefani: OK!'s Exclusive Details
Source: Suri Cruise Will Step Out With Katie Holmes And Her BF, No More 'Hiding'!
OK! Had It First: Exotic Asks Trump For Pardon After Being ‘Sexually Assaulted’
Claws Out! 'DWTS' Contestants Want Carole Baskin 'Off First,' Reveals Insider
Kim Kardashian's Solo Show Deal Is 'Over': 'No One Cares About Her Anymore'
Ellen DeGeneres Is Already 'Getting Annoyed' At How 'Nice' She Has To Be On Set
Aw! Nicole Kidman and Keith Urban Are 'More In Love' Than Ever, Says Source
'Carole's Going Nowhere': 'DWTS' Producers Will Keep Baskin Afloat For Ratings