In a rare, exclusive interview, new parents Jamie Lynn Spears and Casey Aldridge have reached out to OK! to defend themselves and their relationship against the tidal wave of rumor that has nagged them since the June 19 birth of their adorable baby daughter, Maddie Briann.

A recent series of scurrilous tabloid stories have alleged that not only has 19-year-old Casey been unfaithful to Jamie Lynn, but that he’s also gotten another woman pregnant. The stories insist that the couple’s relationship is a sham, that he is still seeing other girls and that Jamie Lynn is pregnant again!

Jamie Lynn’s rep has already tackled the pregnancy rumor, confirming exclusively to OK! that Maddie will not be getting a new sibling soon.

"She is not pregnant," her rep rells OK!.

On the topic of former friend Kelli Dawson, who claims to have been romantically involved with Casey, even after Maddie’s birth, he tells OK! these allegations of infidelity are "not the least bit" true.

"In a small town, everybody knows everybody," he explains. "But when money’s involved, you find out who your friends are."

As for reports he impregnated Kelli, a stunned Casey told OK!, "That’s news to me."

"That is just completely fabricated," adds Jamie Lynn. "He never had an intimate relationship with her, so how would that be possible? Around here, that particular girl is known to make up stories."

And then there’s Whitney Seals, who supposedly romanced Casey. Says Jamie Lynn, "What happened was that one of those girls did it, and in this small town when one of them does it, they’re all like, ‘Good idea.’ They all jumped on the bandwagon."

The tall tales have taken their toll on the young parents. "It hurt me to hear those things," reveals Jamie Lynn to OK!. "Because my family has to read it. It’s not fair to them."

Another factor making things worse is that the Aldridge family has been thrust unwillingly into the spotlight. "Casey’s family is not used to this," the former Zoey 101 star explains. "They might assume it’s true. My family knows it’s not. It was definitely harder for Casey’s family to deal with it, but you just explain that it is part of this business."

The new mom says that her family has stood beside her through the entire ordeal. "They know if I were in a relationship like that, I wouldn’t put up with it," she tells OK!. "My family supports me, and they support Casey also. They read those stories and take them with a grain of salt." 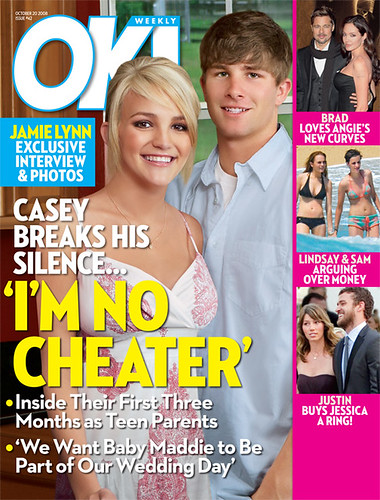 For the entire exclusive interview with Jamie Lynn and Casey, pick up the new issue of OK! — on sale everywhere Thursday!

Want to stay on top of Casey Aldridge news? Sign up for OK INSIDER!