Is Paris Wearing an Engagement Ring?

After aborted engagements to previous beaus Jason Shaw and Paris Latsis, could the third time be the charm for Paris Hilton? The hotel heiress — and one-woman licensing empire — has sparked rumors of yet another betrothal by showing off a sizeable sparkler on her ring finger.

During a shopping trip with her brother Conrad and mother Kathy in Bel Air on Thursday, the Simple Life star made no attempt to hide the bling on her hand, leading many to speculate that she and boyfriend, Good Charlottes Benji Madden, are preparing to take a walk down the aisle. 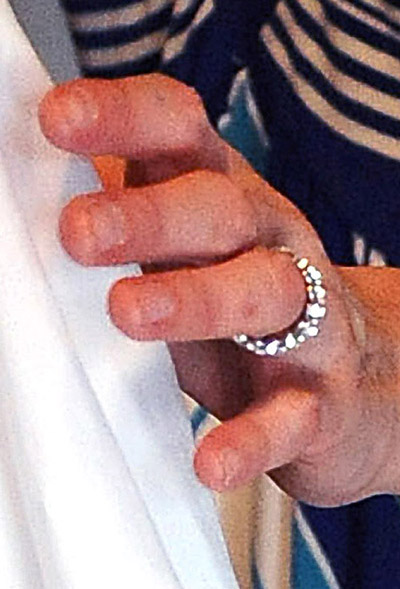 Of course, these photos come shortly after the older Hilton sister was spotted buying a book on weddings at an L.A. store on April 21. And with Benji’s brother Joel Madden prepping to marry Paris BFF Nicole Richie in the coming months, the rumor mill went into overdrive with stories of a double wedding being planned.

If true, this would be a rush to the altar — even by Hollywood standards. The two have only been dating since the beginning of 2008, when Benji split from his then-fiancée, British/Aussie actress Sophie Monk.

However, it looks like this might all be wishful thinking. When reached for comment, a rep for Paris told OK! that any rumors of an impending wedding between the celebutante and her rocker beau are "false."

Want to stay on top of benji madden news? Sign up for OK INSIDER!