During his acceptance of the Democratic Party’s nomination for president on Aug. 28, Barack Obama made politics the focus of his speech. But he also made sure to address an even more important subject: Family.

"To the love of my life, our next first lady, Michelle Obama, and to Malia and Sasha I love you so much," he announced, "and I’m so proud of you!"

If anything captured the historic importance of this election year, it was perhaps the smiling and excited faces of the Obama’s two young girls, Malia, 10, and Sasha, 7, who clapped and cheered their dad on as he gave his acceptance speech.

"They were so excited!" says OK!’s Wynter Mitchell, who was in the crowd that night, about the Illinois senator’s two daughters. "Neither of them could sit still!"

After the speech, the three lovely Obama women joined Barack on stage. He scooped up Sasha, and Malia wrapped her arms around him. Then Michelle joined in, and they shared a two-minute group hug. "It was," says Mitchell, "an amazing moment."

Amazing, yes, but not out of the ordinary for the tight-knit Obamas, who, according to insiders, are such an all-American family that they almost make the Brady Bunch look dysfunctional: mom goes to bake sales, dad balances the checkbook, and the girls love Harry Potter.

"Barack is a great family man," friend and neighbor Rabbi Arnold Wolf tells OK!. "He always makes sure to say hello when he’s in the neighborhood. You would never think he was running for president! And Michelle is extremely bright. I think they work well as a team because they are pretty much equals."

Life at home in suburban Chicago is equally as normal. Both girls have a strict bedtime of 8:30 p.m. are expected to make their own beds and get a dollar each for doing chores around the house. 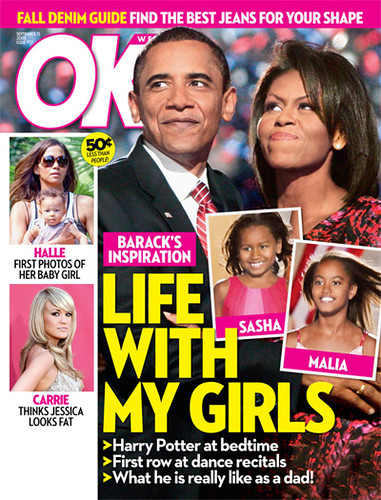 But there’s always time for fun! Like most kids their age, they enjoy playing Uno, hula-hooping, dancing, and diving into their favorite books.

Television is watched in moderation in the Obama household and Barack rarely watches at all! Both Sasha and Malia love SpongeBob SquarePants and Hannah Montana, and, like their mom, are huge fans of American Idol. In fact, the Obama girls even participated in their own election process by backing runner-up David Archuleta during last season’s competition.

"A vote was cast," recalls Barack. "They were very excited about it." 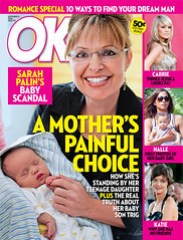 Want to stay on top of barack obama news? Sign up for OK INSIDER!

Exclusive
Trouble In Paradise For Blake Shelton And Gwen Stefani: OK!'s Exclusive Details
Source: Suri Cruise Will Step Out With Katie Holmes And Her BF, No More 'Hiding'!
OK! Had It First: Exotic Asks Trump For Pardon After Being ‘Sexually Assaulted’
Claws Out! 'DWTS' Contestants Want Carole Baskin 'Off First,' Reveals Insider
Kim Kardashian's Solo Show Deal Is 'Over': 'No One Cares About Her Anymore'
Ellen DeGeneres Is Already 'Getting Annoyed' At How 'Nice' She Has To Be On Set
Aw! Nicole Kidman and Keith Urban Are 'More In Love' Than Ever, Says Source
'Carole's Going Nowhere': 'DWTS' Producers Will Keep Baskin Afloat For Ratings